Media4All: the «Oscar» of the Audiovisual translation (Part I)

A week after the big audiovisual translation event, I have managed to find a a few minutes to explain you how the experience was. As many of you may know, I presented a paper about videogames localisation and quality assurance (a new version, slightly different from the one I did last December in December, which I started to explain to you about a few months back), therefore, the whole event was even more special for me.

The adventure started on Tuesday the 28th. In the morning there were some workshops on offer for some people. For others, like me, the whole thing started in the evening, as the Spanish Embassy had invited some of the lecturers and collaborators to the embassy. I went there with Jennifer Vela, who I as looping forward to meet again. After Jorge Díaz-Cintas, Fréderic Chaume and the Spanish Ambassador in addressed their speeches to us, we were allowed to socialise a bit before we had to move to the Imperial College London to the presentation party. It was in this little while at the Embassy that Jennifer introduced me to some of the translation celebrities (Wow! This girl knows loads of important people!), included Miguel Ángel Bernal, one of the most important researchers in videogames localisation. I also saw known faces, such as Pilar Orero’s (I love her!) or Diana Sánchez, who was my teacher at university back in 2003-2004.

Afterwards, we headed to the Imperial College London, where some drinks and munchies were waiting for us: our first networking and socialisation night at Media4All. Jennifer and I spent just a few hours there (including the hour that took us to ay goodbye ^_^) were very interesting. I met some interesting people, got some contacts and enjoyed to see so many people as crazy as me about translation and quality. I also met another teacher from my uni, Eva Espasa, with whom I hope I can collaborate very soon in something (stay tuned: second part coming soon).

The following day, on Wednesday, we started at 9 am and Julia Buckingham opened the conference and introduced a Round Table about Taking Stock in Audiovisual Translation. It was interesting to see how pretty was everything from the point of view of the big multinational company, which infuriated many of the audiovisual freelance translators present. And that was just the beginning… I couldn’t wait to see how everything would end.

After this round table, it was time for a break, tea/coffee and biscuits included. After the break it was the time to go separate ways and choose different rooms, as the parallel presentations were about to start: a total of 5 different rooms offering different presentations simultaneously. Decisions, decisions, decisions. Too many interesting subjects! However, as human clonation hasn’t been invented (yet), nor is teleporting, we had to choose which presentations to go to. As it was the beginning and I had been checking for a few hours, I knew exactly where I was going to go: Audiodescription. Jennifer Vela was presenting a paper and Pilar Orero was the chair, so I couldn’t miss it!

However, it was time of the “anecdote of the day”, and probably, the anecdote of the whole conference. Half-way through the first paper, the FIRE alarm was activated and we had to evacuate the building. We were told that, somewhere in the building, they were recording the last movie of Batman (no, I didn’t see Christian Bale, even though I was looking for him), so we just blamed the recording team for that. I am sure they made something explode and they forgot to warn the security team. 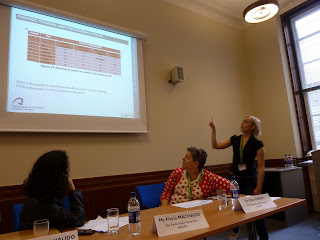 About half an hour later, we were allowed to go back in and we restarted the presentations. Jennifer’s presentation was very interesting, as she compared Audiodescription in different European countries and the USA, as well as the differences in the legal aspect, which proved to be tricky, as nowadays, researches have to pay constant attention to, as rules and regulations keep changing and the information that is true right now, might be obsolete just a few weeks later. Two attendees confirmed her that new laws about Audiodescription and accessibility had been created in some countries. Great news for the accessibility world, aren’t they?

Lunch time arrived, and we went to the food hall to grab some nibbles. It became a bit stressful as it seems the catering service didn’t realise that we were so many hungry people, waiting to be fed. Waiters and waitresses could barely leave the kitchen and the food on their trays was already finished. I had to wait for a long while to be able to grab my first bowl of food. I went to the kitchen Entrance (yes, like a hyena waiting for the lion family to fill their bellies J), where I found Pablo, and asked him to help me get something toe at, as my breakfast and the few biscuits I had during the tea break had been digested a long time ago. My surprise was meeting there a follower of this blog, David (how exciting! A fan!), who also helped me to get another bowl of food. Isn’t that cute?

Lunch time ended and the next presentations session started. This time it was the turn of characters translatability in movies and the effect of those characters in the audiences. Three very interesting papers. On one hand, we were given (loads of) data about audiences in cinema festivals in . Then, Carlos de Pablos explained to us part of his research about how different audiences (people who had contact with Spanish culture and people who had no contact whatsoever, as well as Spanish audiences) perceived the different characters and roles in Pedro Almodóvar’s movies. The results were astonishing, and helped me understand why British people thought I was a bit of a nutter J The last presentation was given by an old university classmate, who explained how characters from the Lord of the Rings books had been “translated” in the movies. I had already seen his presentation in , but there he had focus his study on videogames, and not movies, but it was as interesting as the first time I heard him.

Another tea/coffee break and the last session of the day started. Now my heart was divided, as I was interested in the papers being presented in two of the rooms, and so I tried to go first to one of them and, then, to the other one. 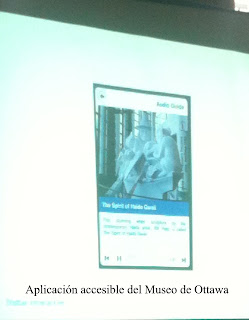 I started with audiodescription in museums, which was pretty interesting. They explained that in museum they had an App for iPhone and iPad with audiodescription and subtitles of each of their artworks. It was like an accessible audioguide. The rest of the presentation, I was a bit lost, as it seemed they were advertising how great their museum was, and we weren’t interested on listening to commercials, were we? ;)

And the «Vino de honor» (Honour wine) time arrived. I decided to go for juice, as I had some work to do at home, but it seems wine honoured many of the guests. ;) After the wine and networking time, we went to look for a place to have some dinner. The idea was to go to have a pizza, but we couldn’t fidn the place and ended up having English pub dinner. And, as it happens in all English pubs at 11 pm are last orders, so we had to leave. My presentation was the day after, so I decided that my party time was over for the night and went home.