First of all, I wanted to apologise for not having updated my blog for so long, but I have been busy on personal things, doing some more website testing, doing some translation tests and, well, embracing the arrival of spring, which will probably be the season with the best weather we will have in London. J I have also been preparing a paper to be published. I have never thought that publishing a paper was so challenging, especially because of the amount of references and the tone you need to use (well, you know me, it’s hard for me to be cold-serious at all times…). But I am still working on it. Hopefully, I will manage to get a good text and I will get it published.

But now it is time to explain you a bit about one of the subjects that really worry me: Quality Localisation of videogames. That was what I talked about at the Conference about Translation and Accessibility on Videogames and Virtual Worlds in .
So, Ready? Stady? Go!

Quality Assurance, Localisation and Experience: The Perfect Combination for the Best Localisation.

1.- Introduction
Videogames, games, Facebook applications, smartphone applications, mobile games, online games… Since their first conception in the 50s, and their boom in the 70s, we all have interacted with one those in some way: on an arcade machine at the nearest pub, at our best friend’s house, using our older brother’s consoles, being beaten by our big brother, at the school/university computer (even though this is not allowed) or grabbing our partners’ phone when they aren’t looking… The era of the Internet allowed the games industry to take off and get to what we know it now, where we can interact with other people in our games, or even play and speak at the same time. Nowadays, we are more connected with the rest of the world than ever, and selling a videogame in an international market can prove huge benefits for its creator (Diana Monzón, 2006: 4). It is because of all this that the translation of any game or application is essential for any company that would like to reach top marks in sales worldwide.
But, as it always happens in any business, money seems to be the most important part, and, at the same time, localisation and creating good versions of a game or application for international markets seems to be the least important part of their business. Therefore, the localisation of software is not always up to the highest standards, not only because companies want to save on costs, but probably because they don’t really understand the importance of a localised product and how it can impact on their sales.

2.- What is considered a good localisation?
There are examples of games in which this cultural adaptation has been brought too far.
a) Translations too specific for a culture or a generation
Not long ago, Álvaro García, a blogger who writes about translation in his blog “[Sé lo que] Traducistes”, helped us discovering a fantastic game, which had been localised into Spanish following a parody on a famous Spanish comedian. The whole game was full of expressions used by this comedian in his jokes, which made this localisation not only a bit old-fashioned, but also a bit annoying. It is true that one of the prints of the creativity present in the games localisation is the so-called linguistic variation (which Molina and Hurtado, 2002, defined as “the introduction in the target text of dialects absent in the original for characterisation purposes”), but I think, in this case, the localiser went one step too far. I have not played the game, but we could imagine that, spending around 20 hours reading not only spelling and grammar mistakes but also the same type of language, jokes and twists that used to characterise that comedian, can be very, very tiring. I will mention three examples that made me raise an eyebrow:
1) If you can understand Spanish, in this first image you can see how an extra “l” is added to the end of the last word of each line. This was how this comedian used to pronounce some words. It was funny for a while, but that was 15 years ago. Not anymore. Also, in this case, it shows the lack of imagination of the translator, who instead of doing a proper poem out of three lines, with their corresponding rhyme and metrics, decided to rhyme those lyrics by making the words to finish the same way. 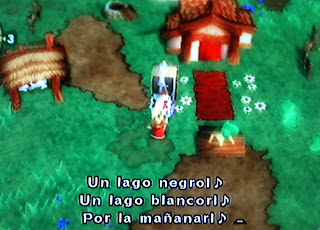 2) In the second case, the translator decided to use one of the insulting words of that comedian. “Fistro” is what this comedian would use to call someone an idiot (pardon my French), even though that word does not exist in Spanish. But the irony of all is that, in the game, this was not used as an insult, but as the name of a character.

3) In some cases, the localisation of some of the characters names was puzzling and difficult to find a relation with the original. And it is not because the translator decided to localise most of the names and use proper Spanish names, which would have made some sort of sense, but the fact that, in some cases, references to this comedian, certain Spanish beverages, insults or even politicians, were added to the localised name. 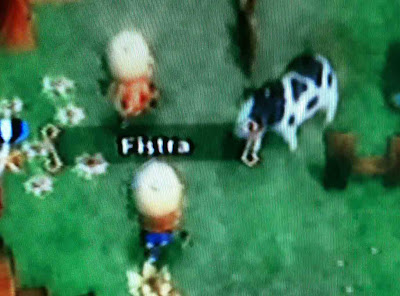 One good point is that the three main characters were localised properly adapting the original names to how they would be pronounced by a Spanish-speaker:

· Howser → Hauser
· Liam → Liam
· Verde → Verdi
On the other hand, some of the names of the “supporting characters” can bring some giggles or smiles to those Spaniards reading them, and not for the good reasons:
· Jaden → Merluzo (male hake; a fish)
· Mike → Florentino (a TV Presenter)
· Adolf → Rosendo (the name of a Spanish band)
· Lily → Pecadora (Sinner, female)
· Caden → Aznarín (“Little Aznar”. Aznar is a Spanish former politician)
There are also other funny names such as Tintorro (beverage) or Fistra, as well as other very old-fashioned names such as Hortensio, Agapito, Fecunda or Wilfredo (Wilfred), which brings us to our memories names of our grandparents and great grandparents.
This is the full list of names, for your rejoice:
Main characters
· Howser -> Hauser

The problem of this localisation is that it can’t travel through time (15 years later, people might not understand the jokes) and people from other countries where Spanish is spoken might not understand it either (not only in , but also any other person in any country where people might understand Spanish). This is because the localisation has been made for a particular culture, is stuck in a period of time relatively short (what are 5 years of the comedian Chiquito de la Calzada in when Spanish language has been “alive” for 1000 years!). I doubt many of the teenagers nowadays can understand this localisation, as when Chiquito de la Calzada was on TV, they were just babies, or maybe their parents weren’t even together! J
Yes, it is important to adapt the product to the culture, but it has to be understood by most of its members, even better if several generations can understand it. It is also recommendable, especially with humour, that it can work well throughout the years.

b) Localisations unfinished or partly localised
Apart from those cultural-related issues when localising, there are other mistakes in localisation that may come from lack of information about the game to localise or even a poor level of the source language that they might have. Sometimes, it can be as easy as the lack of interest from the developer/distributor to even spend some money on doing a proper localisation. One example of the latter can be found in the so-called Spanish localised version of Happy Aquarium. This is a very simple game, in which the player has to keep and take care of an aquarium by buying fish and making sure they are fed and healthy at all times. But it seems the developers gave up too quickly in localising the game, as they have left it half translated. 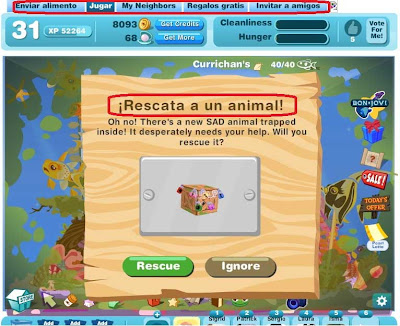 The text highlighted in red is translated whereas other items that are always present, such as the Rescue/Ignore icons or even the ‘s after the name of the owner of the Aquarium, aren’t localised. Even in the game tabs at the top, it seems that they forgot to translate basic things such as “My neighbours”.