Less than a year ago, Mox surprised the world with a book, which compiled the comic strops from Mox's blog, together with many more strips and some articles from well-known translators.

This year, Mox did it again. Well, not Mox, but Alejandro Moreno, his 'father'.


He compiled again more comic strips from his blog, as well as other unpublished ones. He also asked other translation celebrities, such as AndréHöchemer, Catherine Christaki, Erik Hansson, Riccardo Schiaffino, Xosé Castro or Michelle Hof, among others, to write an article for his book. Alejandro also asked the humble servant and owner of this blog (a very tiny one next to them) to also write one little article.


The result: a compilation of hilarious comic strips, and a list of thoughts of several professionals of our world that complement perfectly with the cartoons, which Alejandro prepared with all his love.

I also recommend to read first the first book (or the whole Mox' blog, if you prefer), as it will be a good way to know the whole of Mox's story from the beginning.


BTW, my modest contribution is just a small anecdote about many of the e-mails many of us receive from agencies, the eternal debate about "my best fee" might not be "your best fee", a discussion that might get into an infinite spiral between the PM and the translator... until one of them gives up.


No doubt, this will be the ideal present for any translator or interpreter, a must-have for this festive period, which can be yours with just a few clicks (and a PayPal account, of course). I am sure that Santa and the Three Wise Men (if you also get presents on this day) will love gifting you this (after opening them to have a quick look, that's it).

Today I look back and I see myself having done my first presentation in a conference, very happy for what I had achieved in the last months of 2010. However, the year didn’t start quite as expected, especially if we compare it with how 2010 had finished. Do not worry, I am quite stubborn and I was determined to change it, and so I focused on getting more clients and a good workflow. Thanks to working hard the year before for the online betting company, they asked me to go back for a few weeks at the beginning of the year, and so the timing was perfect, while I was waiting for the games localisation in summer. Now you know: Work hard, and make sure you prove you are professional and reliable, as you never know when you are going to be needed again. In the middle of this joy, I received an e-mail letting me know that I had been admitted to present a paper to another Conference: el Media4All in , at the end of June.

I don’t know if you had the same, but to me, it seemed as if the “translation” part was taking a bit too long to take off, just as if, suddenly, translation agencies had disappeared from the map. As I can’t spend too long without doing something, I seize the low moments to do another important aspect of the translator’s life: networking. In April, as Xosé Castro was doing a Workshop about Word (in Spanish) in Valencia (Spain), which was organised by Asetrad (Spanish Association of Translators, Interpreters and editors), I decided to go to Valencia to visit my good friend Vanessa, and see what all the fuss was about. The experience was amazing (I and II, in Spanish), not only because I introduce my friend Vanessa to the whole world of conferences, tweeters and bloggers, but also because I was able to meet more tweeters, as Manuel Saavedra, Jordi Barcells, Irene Sánchez, Ana Rubio and, of course, Xosé Castro (a guru of Audiovisual Translation, very well referred in two of the subjects I did about Audiovisual Translation at uni), who I really wanted to meet (in order to see if he was real… and yes, he was!). Also, I met other amazing people, such as Judit Samblás, Gemma Sanza, Marta Ortells or Núria Sanmartí.

I went back home with my battery charged. Fully-charged. But the translation world still seemed to be idle, and so I used the time to prepare an article about “localisation, testing and QA” to publish. Also, I had to undertake an operation in my ear (a long story. You can read about it in Spanish here) and, not long after, I had very sad news about a friend. That’s Murphy’s Law: if something can go wrong, it will go wrong. But the good thing is that, once you have reached bottom, you can only go up. And so was it. Media4All was here, another amazing experience I recommend to everybody (more info here, and in Spanish here and here). There I met (as in, finally meeting them in person) three more gurus of Audiovisual Translation: Jorge Díaz-Cintas, Miguel Bernal and Frederic Chaume (and yes, they are also real and you can touch them, and even they allow you to take a photo of them!). Wow! I felt like a teenager when Justin Bieber gives her an autograph... but without the screaming.

Of course, Murphy was spying on me all year long, and during those three days of Conference that I wanted to myself, was the perfect moment to make the interesting projects to arrive. The first one was a videogame for several platforms about a Cartoon Network character (when I can disclose more details, I will do so). Then, it was the time for a MMORPG based in the Medieval Times, a very interesting project (the biggest I have done so far), which drove me mental with the research of weapons and punishment tools. I wasn’t even finished with the project and I had to move flat, then go on “holidays” (you know translators can never go on holidays), then come back to to receive my sister and her family at home... Glorious summer!

No, no, no. Don’t go anyway, as summer didn’t finish here. I also had time to publish my first article, start new projects, as Revista Traditori, a new magazine made by professionals from the Translation/Interpreting industry to anyone interested about translation, interpreting, languages, etc., but mainly focused to future translators, to whom we explain a bit about the “real world of translation” (if you can understand Spanish, you can read about it here, here, here, here and here, or just ask GoogleTranslator to help you out). I also started a project with Pablo and Elizabeth, organised by Johanna Angulo, which I hope I will be able to talk about really soon. What else? Ah, well. In September, an old colleague called me to ask me to collaborate with them creating a videogame, and that is how my autumn started.

The localisation projects, the videogames, preparing my lessons for Johanna’s Project, finish my second article, I barely realise that November had arrived. But my life wasn’t fun me to invited me to do a presentation about student mobility in December. A month earlier, many tweeters colleagues (as well as Maya, the president of the Catalan Association of Translators and Interpreters-APTIC) spent two weeks trying to convince me to go to to a workshop about blogs organised by APTIC (in Spanish). I could not say ‘no’. Ah, well, I hear the words “party”, “translators”, “fun”, “networking” ( Carolina, Aida, Iris, Maya, Clara, Mar, Verónica, José Luis, José Manuel, Laia, Miriam, Manuel y Lidia...)... And I have to go. Another unmissable event.

The icing of the cake: the year ended with two (indecent?) proposals. The first of them, Mox’s Blog’s authos, Alejandro, was asking permission (???) for him to publish a comic strip in a book that has just been launched, as he had been inspired on an idea that I sent to him a few months back. Imagine my face... Just like a manga character, with my mouth wide open hanging to the floor. The second one (proposal, of course), was to be part of the teachers group of a new course organised by Educación Digital (in Spanish, though), which will start at the end of January. This time, apart from leaving my mouth open, I had to rub my eyes a few times, because I couldn’t believe what I was reading. Of course, I enrolled the ship too.

And last, but not least, when it seemed the year was going to finish just like that, I was lucky enough being able to start a translation project with other tweeters: Manuel, Ander and Jennifer, as well as Miguel Ángel (who I didn’t know before, and I don’t think I follow him on Twitter). The project was offered by the best Spanish agency I have worked with so far (Kobalt Languages), under the conduction of two project managers who made the whole process pretty easy: Ricard and Ana.

Now, my year has started quite well. I really hope it will be the beginning of an even better year. As you can see, bad things happen, but also good ones, and we have to take advantage of the bad ones, when you are at the bottom, to gain momentum and run up the mountain. Just one more advice: Never give up!

Entrada en castellano
Posted by Curri at 9:34 AM 3 comments: 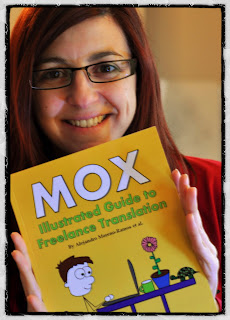 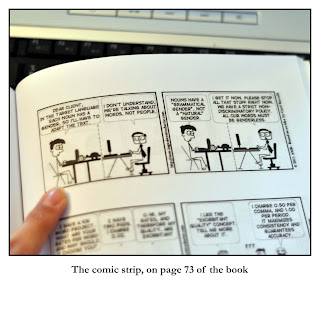