In my last post, I was explaining what a developer or publisher has to have into account when localising a game, and I also gave some of examples of games, whose developers or publishers have failed in reaching a good localisation. In this post, I will continue with those suggestions on game localisation.


c) Poor knowledge of the game
Something translators would request on time and time again when they are given the task to translate anything is to please provide some context. In the case of games localisation, knowing how the game works is crucial in order to get the most accurate translation for each term or sentence. There are multiple examples of how key the context is for a good localisation. For example, in a game where the player has to collect different kinds of objects, the word “bat” could be translated in different ways if we refer to the animal, the “stick” used to bat a baseball, a table tennis bat, or even a verb implying the player to bat. Therefore, there are 1 out of 5 chances to get it right, and so, not only the context but an image or even the game would be necessary to be able to solve this problem successfully.


d) Poor knowledge of the source language
Another example would be those localisations where the user needs not only to know very well the source language, but also how the game to localise works from within. One example of this would be those cases in which the source in English would use the plural to refer to a single person but without wanting to mention the genre of that person (they/them). In Spanish we also have ways to express this “neutral” genre. However, by seeing the English text in plural, any translator without a wide knowledge of this aspect from the English grammar might be tempted to use the plural, instead of singular.
For example, if we go back to the example of Happy Aquarium, when visiting a neighbour, the user can click on an icon to let the aquarium’s owner know that their fish need feeding. At the top-left corner of the screen, there is an icon with the message: “Let them know”, which could literally be translated into Spanish as: “Díselo a ellos”, in plural. However, in the game, by clicking on this button, you only let know ONE person. The correct form in Spanish should be in singular: “Díselo”. In this case, the translator should wonder if this is a neutral singular form or just plural. If they don’t know, they may ask the client for clarification or, as it was explained in the previous point, play the game and discover what that function does, and so, avoid the error in localisation.

e) Specific requirements for a market or culture
The localisation of a videogame takes place, most of the times, while the videogame is still being created. This facilitates the process of adapting the videogame to certain culture, either because puns and jokes won’t be understood in the target culture (and, therefore, we can change them during the Translation/Localisation process), or because certain parts from the source culture are not allowed or accepted by the target one.
For example, in it is forbidden to show red blood or dismemberment of human bodies, or even certain violent scenes in videogames (and it seems that more laws will appear soon on violent videogames development). Therefore, companies wanting to localise their products for the German gamers must add an option in which blood does not look like blood. This can be very creative, sometimes. Most of the times, it can be removed all together, or the colour can be changed, so it is not red anymore. But the options are infinite (as long as the red colour is not used), and creativity can sometimes can sometimes flourish within the design of the game. 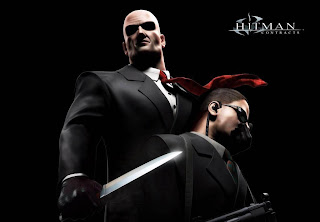 In one of the games of the famous Hitman saga, you could either turn off the option of seeing any blood at all, or even switch it to an option that will show flowers instead of blood. Yes, when Agent 47 kills someone in the German version, the dead person “bleeds” flowers. I might be too twee for some people, but it works for the German censorship. In this case the localisation does not really mean an extra cost, as this “flowery” version is included in all languages and the game is sold in just one SKU, Storage Keeping Unit, which in videogames is usually the format or formats the game is created (DVD, game card, downloadable content, etc.).
Sometimes a videogame may require the game developers to do a special version for a certain culture, which will be sold separately, or in a separate SKU. While I was part of the Age of Conan: Hyborian Adventures testing team, I was amazed to learn that the company had to do a special version of the ways to kill an enemy. 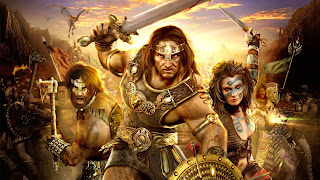 Age of Conan is a saga of MMORPG translated into 6 languages, in which the main character, so you, the gamer, has to gain reputation by killing, stealing, helping people, etc. So for you to have an idea of what I mean, just imagine Conan the Barbarian (you can use Arnold Schwarzenegger in this case), slaying enemies with his sword, chopping heads and limbs off and leaving the bodies bleeding to death. Something like that would never be allowed by the German censorship. For this reason, Funcom, the developers, had to create a new version of the game in which the killings were “non-aggressive” (if we can say that). Besides, the character would never chop off any heads or limbs. Blood was also inexistent. Due to all those changes in the code itself, this version had to be sold in a different SKU (on a DVD), aimed only to the German market.
It might seem that localising a game might mean a lot of effort and money, and that doing those special versions may make things too complicated, raise the budget and make the whole project more expensive, but when a game is good and the foreign gamers like the localisation, the sales a company may reach will completely justify the initial expense. Because a good localised product does not have to be too expensive, and it should not add any extra issues to the already complicated software creation. I think it is wrong to believe that, the most important thing when creating a videogame is to keep costs to the minimum, without caring what the result will be. Also, localising a videogame once the whole process is finished or doing it while the product is being created can make a whole of a difference. As Diana Díaz Monzón explains in her article about localisation, “planning the game localisation from the beginning is an investment that may be tremendously profitable: up to 50% of income is obtained from international markets”. The “easy” solution may not always be the cheapest and not even the one providing the best quality.
But with the industry in need of experienced, flexible and hard-working professionals, we should wonder why do we see once and again games that haven’t been properly localised (such as the examples I showed above). Are external contractors the best to do the job or is it better to have everything done internally? I will try to explain these and other questions in my next post.

Thanks for reading.
Curri
Posted by Curri at 7:00 PM 1 comment:

And the winner is... 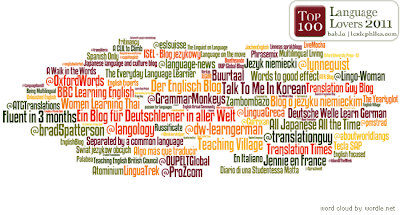 On my last post, I explained that I had been nominated for “The Best 100 Language Lovers”. To be more precise, I had been nominated to the 100 language tweeterers (@Currixan) and also, the Facebook profile of this blog, Localización y testeo con Curri, had also been nominated for the 100 Language Facebook Fan Pages. The results we published some time ago (sorry, I haven’t had much time to prepare this post to announce it), and all I can say is that it has been quite good for me, having into account that both my Facebook page was created only around 6 months ago, and my Twitter profile had been around for less than a year.

And so, the rankings are as follows:

Twitter: @Currixan was 16 out of 100 → You can see the Top-25 here. If you have a Twitter profile, have a look at their profiles and follow the guys and girls on the list (well, apart from me, of course ^_^), as some of them offer really good info. Before the contest, I was already following a few of them, such as Pablo, Catherine or Silvina), and there are others, who I have started following after the contest, and they have tweeted very interesting news about languages and translations. 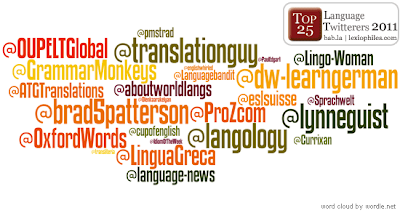 Facebook Page (Localización y testeo con Curri): I was 16 out of 100 → No, it is not a mistake. Maybe 16 should be my new lucky number, but yes, I was, again, 16th. The top-25 Facebook fan pages can be seen here. It’s worth having a look, as many other known translators and followers of this blog also had good results, such as Ismael, Pablo or Leticia. 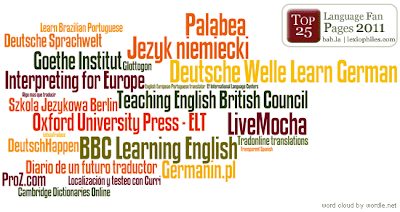 It is also worth having a look to the other two categories:

And last, but not least: from the contestants in all categories (i.e., 400 in total), they did a list of the 100 language lovers, where my Twitter was ranked 44th, which I think it’s a pretty good ranking.

All this, thanks to you, and you, and you, because you have encouraged me to write. And you also have voted for me. Thank you very, very much.