My Premier as a Conference speaker

First of all, apologies for not having updated my blog for such a long time. Back in September, I learnt that a Conference about Localisation and Videogames Accessibility was meant to be held in , on the 2nd and 3rd of December. I thought it would be very interesting to take part in it, as I haven’t been in any conferences about translation since I left University (during my University years I went to a few Jornades de Traducció –Translation Conferences- which happen every year). But during one of those days of transitory insanity, where Pablo Muñoz and Ana Ramírez didn’t stop bugging me to present a paper as speaker, I realised that, well, some day, had to be the first time, and I decided to prepare a paper. I contacted the organisers, who also insisted on me going there to participate as a speaker, as they wanted to hear what I had to say about the localisation industry... And I couldn’t resist to so much imploring (well, well, it wasn’t really imploring, ¡but it sounds so good! ^_^).

ablo and Ana were telling me that I had to go, but they didn’t specify what they wanted to know from me J Well, at least, that was my excuse. I imagine that, my subconscious, had another excuse, the excuse translators and writers constantly find: Fear to the «White page». It was hard to overcome that fear, but I managed to overcome it, wrote the abstract and sent it. I had a few weeks to prepare my paper. Well, it’s still a long time, isn’t it? Especially, because I didn’t have much work to do.

But, amigos, you can’t imagine how annoying Mr. Murphy can be. He is like a hyena, always lying in wait for some distraction, or for someone wishing something, to intervene and pester. And that is what happened. I was sooo happy with my spare time and the opportunity to be able to prepare properly my paper… And, BANG! Agencies started sending me work, new people contacted me to offer work... Of course, for obvious reasons, I couldn’t say no to that (who knows when I will have work again?) :)

Thanks goodness, as my best university friend Núria says, sometimes «luck» comes when you less expect it (more than luck, I needed time). I spent a month without any rest. I overcame a tonsil infection and two colds, but I tackled it head on :) I started putting on paper everything I had in my head, everything I wanted to shout at the World about, and what I think of the Localisation industry, and I didn’t stop until I finished it. And I felt great, man! I think I felt as good as if I have had a baby… But without the pain bit. 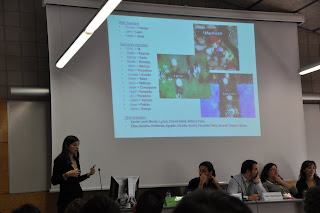 I managed to create a decent Power Point (isn’t it?) on time to the presentation, even though I haven’t used a Power Point program since 2003, and even though the trip was stressful and I hadn’t properly rested for about a week, and also my voice started to sound more to that of a truck’s driver, I managed to pass the task!

But is not that simple. I managed it, yes, but I got so excited while I was talking that, half way through my presentation, I was told that I had only 3 minutes left, of the 20 minutes allotted to each speaker. I confess that I added a few things that I didn’t prepare, and probably that is the reason why it was a bit longer than expected, but hey, that is what happens when you have a public that stares at you with open eyes and absorbing brains, trying to get as much information as possible: one feels bigger and can’t help it but share all her experiences with her audience. I think it took me about 10 more minutes to finish (sorry!), but it turned out quite good, and it seems the audience liked it. And, well, I also felt great by being able to deliver such a good speak in such a short period of time. But that wasn’t all. It seems I said some things that surprised some people for bad, and others, for good. But you all know I am just like that: I first speak, then think. I was probably the one who dare to say what everybody were thinking but didn’t dare to say. Yes, that is me, Curri Barceló. For everything else, Mastercard :)

I also loved to hear other points of view, learn new things (as the issues color-blind people have when playing videogames... Yes, I had never thought about that!) and, well, discover that more people than what I knew know me ;) (my favourite sentence of the people attending to the Conference was: "Oh, you are Curri! Finally!»… I could't believe it! But... «I luv it». Thanks to all for making me so happy.

Oh, yeah, ladies and gentleman, I have loved the experience so much that I want to repeat it. What the heck have I done in the last 6 years? I have missed so many «translation» parties! I could have written so many articles and, well, who knows, even a book. From now on, get ready, because Curri is back for good. I hope you like «Curri» (it’s a pun), because you will enjoy me for a long time ^_^

Thank you for reading.